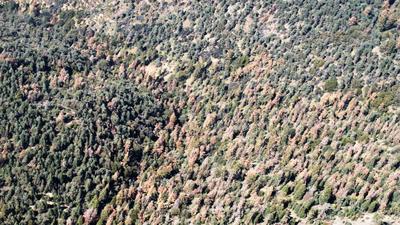 The idea that forest thinning can produce more downstream water is not radical, as several studies over the last few years have suggested that’s the case. But it’s never been proved on a large scale and there’s no hard data to pinpoint the potential benefit.

“The question is, how much?” said Roger Bales, a UC Merced professor who studies mountain hydrology. “We’re trying to provide accurate estimates to that question. And we’re trying to write predictions that are accurate enough for investors to see there’s a benefit.”

It’s a complex problem. No watershed, no mountain, no single hillside in the Sierra Nevada range is exactly like another, and all sorts of factors — including elevation, slope, soil thickness and underlying rock features — can affect how much water flows downstream.

One possibility is to use satellite imagery documenting forests before and after thinning. That information would be combined with models developed by Bales and UC Merced research Philip Saksa, Blue Forest advisors who have data from weather sensors throughout the Sierra. The idea is to come up with a rough estimate of how much less water is being absorbed by the forest, and how much more is heading downstream.

Blue Forest has met with hydrologists at Pacific Gas & Electric, but has yet to persuade the utility to commit to the project. Utility spokeswoman Lynsey Paulo said PG&E is interested but needs to know more about the water benefits and other details.

Mike Illenberg, a spokesman for the Forest Service’s parent agency, the U.S. Department of Agriculture, said partnering with outside groups is an “essential mechanism” for restoring forests, but did not address Blue Forest’s plans.

And even if the Forest Service signs on and clear metrics can be agreed upon, Blue Forest will have to convince the other entities that the forest-thinning work will save them enough money or provide enough extra water to be worth backing the bond offering.

“If we spend $5 million to avoid a $2-million potential cost, that doesn’t sound like good business to me,” said Richard Sykes, an official with the East Bay Municipal Utility District water agency, which has spoken with Blue Forest.

He likened Blue Forest’s bond proposal to a shopping mall — one that needs a few big, anchor tenants to support many smaller ones.

“They need to have the Forest Service. They’re the biggest beneficiary,” he said. “You’ve got to have a Macy’s in there. We’re the taqueria.”